This part is exclusively for those parts of Java that cannot be fitted into anywhere else. This is a safe haven for such pieces of code, but that doesn't change the fact that they can at times be completely unecessary. Nevertheless, they have a right to be documented, and they will be here.

Cursor simply sets the cursor you are using to be a default shape, or a custom shape if you so wish. Bear in ming that there will be no pictures here because you don't actually see my cursor. As a result it is completely pointless to look at a button and not be able to see the use. Anyway, you can change a cursor in the following way:

Bear in mind that WAIT_CURSOR is not the only cursor form. Oracle are kind enough to supply more predefined ones that that. Here is a list of them (this is not exhaustive, but is close):

Just in case you are worried about it permanently changing your cursor - it only lasts for when your cursor is hovering over the JFrame, so changes back when you mouse out of the frame. It also only lasts while the program is running.

In many games there are buttons with arrows on them that usually signify which direction the game character will move upon pressing. These buttons are also available in Java Swing. To use these you will need to import something we haven't used so far: javax.swing.plaf.basic. It is up to you whether you import the entire library by using .* at the end or just BasicArrowButton itself, but you will need one of them. In my experience, it is always better to import the whole library. Anyway, these buttons are different to normal buttons as in they don't need to be declared and instantiated before adding. You do it all as one. To add a arrow button to an inherited JFrame, you do the following:

That is all pretty self-explanatory, but bear in mind that BasicArrowButton.NORTH creates a up-facing arrow, as WEST would create a right-facing one. The next image is an example of all 4 of them used together. I have made these in such a way as to make them look like they would in a game:

As a first and foremost, I have not mispelled colour in the title, but am using the official syntax for java, which spells colour in that way. Moving on, a JColorChooser is very difficult to explain without the use of an image. Nevertheless I will try, but if you can't visualise what I am, then don't worry as there will be a picture later. A colour chooser is a pre-formatted component that you choose colours from. As for what it looks like, if you've ever used a program with a 'more colours' option, then that will bring up one form or another of colour chooser. You'll recognise it when you see it. To create these you use the following code:

The first line is the declaration and instantiation of a Color, which has been set to white. The second line, the important one, sets colour to be the value of a JColorChooser with the parameters null (which is just there); "A colour chooser!!" (which is the title of the colour chooser) and colour (which is the colour the chooser starts with i.e. white). I would put the second line inside an ActionListener connected to a button, because you can then click the button to bring up the JColorChooser. Now that's explained, here is the elusive JColorChooser: 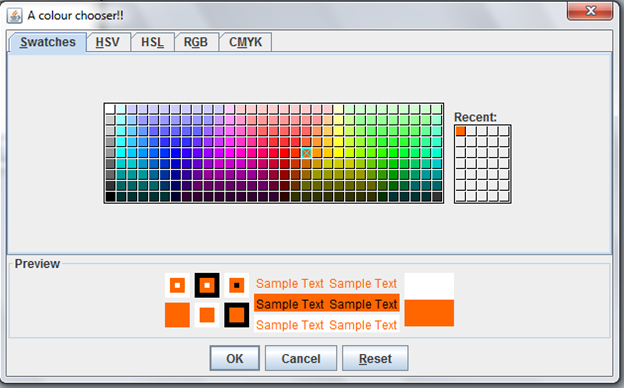