In Chapter IV, I mentioned three basic layouts, but they are not the only ones.

The first line is the important one when using the Box Layout. You set the layout to the panel, as with all the others, but the contents of the parameters is what's important. The first word is the parent component i.e. the panel. Then the BoxLayout.PAGE_AXIS sets the components to be aligned vertically, which is one of the reasons the box layout is better than the flow layout. However if you do want to align the components horizontally, you just replace PAGE_AXIS with LINE_AXIS. Anyway, using the code above, you create something like this: 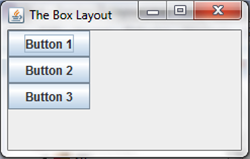 But this is not the extent of the box layout. The first thing that we can do is separate the components. To do this you have to use the following code:

This will separate the two components that it is placed in between with a gap of '5', which can be interpreted as 5px. This is created by the new Dimension(0,5), which would be replaced by new Dimension(5,0) if you were using the LINE_AXIS. The separation looks like this: 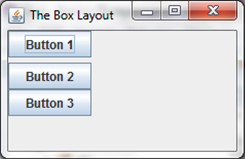 One final thing that you can do with the box layout is 'glue' the components to the top or bottom of the frame. To use this you will need the following:

This is placed between the first and second button, and it is a vertical glue, which, quite literally, glues everything after the first button to the bottom. If you wanted to use this with a LINE_AXIS then you will simply have to use this:

The vertical glue will create the following layout: 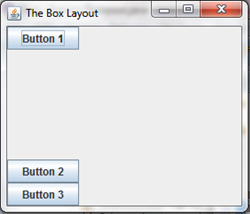 This layout allows for two panels to occupy the same place. This is not the only way, but is the best. As a point of reference, the least experienced will use JFrames, the more experienced will use JTabbedPanes (which you will experience in Complex Interfaces) but the best will use this. To use a card layout, you have to actually declare and instantiate it - which is brand new for a layout. As a reminder:

So, to use the card layout, you have to have a few things. Firstly, you need the panels, but you need one more than you will be showing. In other words, if you plan to house three panels in the same place, you need to declare four. This fourth extra panel is the container for all the other panels. Once you have that, you need the components to put in the panels, and I will be using buttons so I can change the panels. Then you will need the following code:

Once you have that, you have to actually make the buttons switch the panels. So, add ActionListeners to each, and use the following code, which includes the show() method:

This is for the first button which, when pressed, will show the second panel. This is easily replicable by simply including the container panel (otherwise known as the parent component) and the identifier of the panel. You can create something like this using this, and you'll just have to believe me that this was all done at once using the same space.

The most powerful, and most weirdly named, layout, the GridBagLayout. This is, most definitely, the most powerful layout, and it sets the frame up as a grid, like a gridlayout but gives far more adaptability. Before we get ahead of ourselves however, we have to know how to use the basics of this layout. First you have to set the layout to be GridBagLayout(), but you also have to declare the following:

You will have to remember gc because that is what you manipulate and then you add he components to that. Bear in mind that gc is just an identifier, so you can replace it with anything. So, for example, if I had 4 buttons and wanted to have 2 on the top row, 1 on the middle-left and 1 on the bottom-right, I would use the following:

The code above should mean nothing to you but is actually very simple. I mentioned that GridBagLayout works based off of grid co-ordinates, and that is what the whole business with gridx and gridy is doing. gridx = 0 and gridy = 0 refers to the top left corner of the frame. Setting gridx to 1 would move it over one on the x axis; setting gridy to 1 would move it down one on the y axis. Also, it must be noted that when you add the component to the JFrame or JPanel, you must add it to the GridBagConstraints at the same time. So, instead of add(btn4), you have to use add(btn4, gc). It would be useful to remember that GridBagConstraints are also position-sensitive. Therefore you should add the button directly after you set the location. The fact that it is position-sensitive will become important later. Anyway, the above code will create the following: 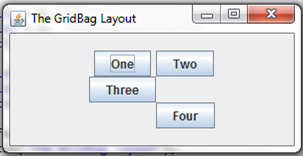 You will notice that there are some problems with that frame. In other words, it doesn't look good. The first thing to do is to fix the differing sizes of the buttons. You can do this using .fill. To use this you need to do the following;

Using either the top one or the bottom two, you can fix the button size and make it look like the following picture:

Now, I've decided that I don't want all the buttons to be touching eachother, but I still want them to be the same size. So, I can use .insets:

The following layout of buttons are therefore created: 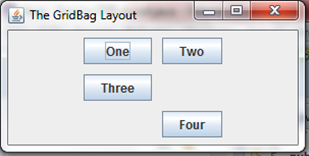 And finally, I've now decided that I want the third button to be the size of two buttons lengthwise. Therefore I will need it to fill up two columns. To do this you need to set the width of the component (or indeed the height if you want the buttons or component to span rows) :

Finally, and I prefer this layout of buttons to the first time we used GridBagLayout, this is what a combination of the above can achieve: